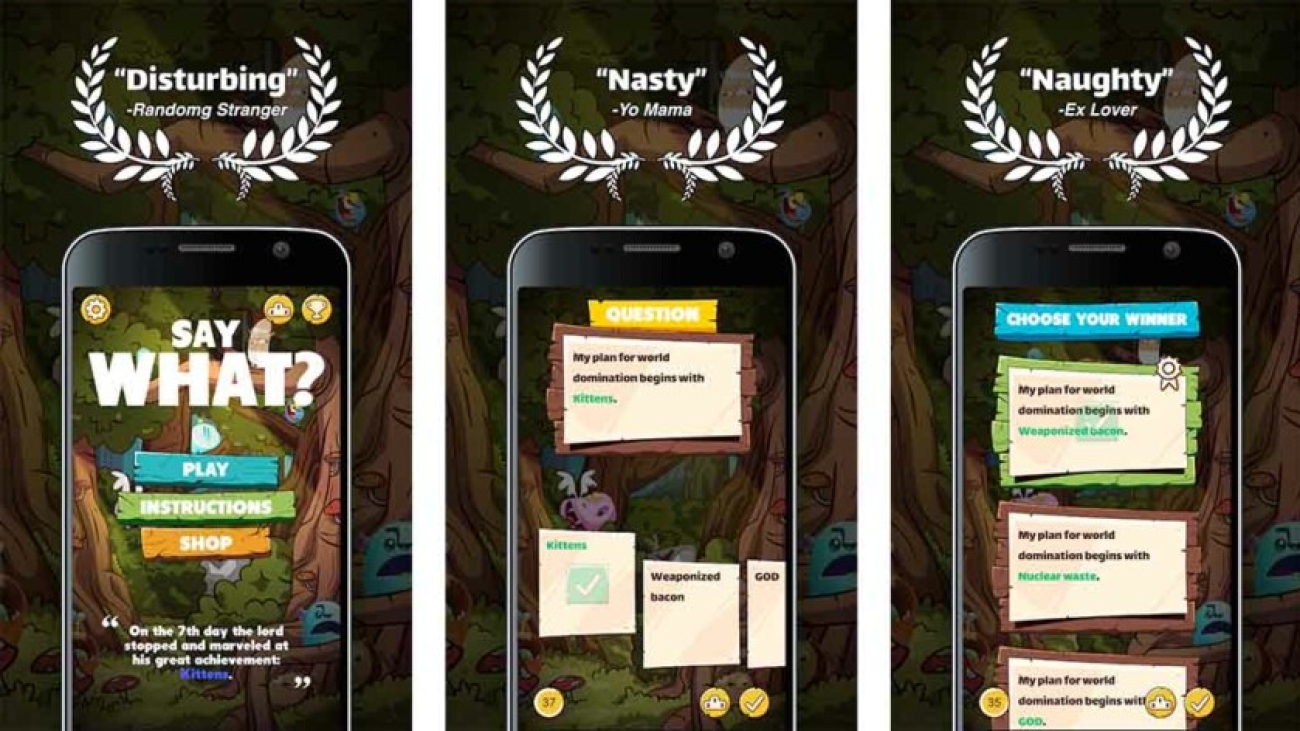 Card games are a fantastic form of entertainment. They work anywhere and everywhere, they’re small enough to fit into a bag for travel, and there are many different kinds of card games out there. However, they can be boiled down into three varieties. There are classic card games like Poker, Spades, and Solitaire. Then, you have more complex card games like Hearthstone, Clash Royale, and Reigns. Finally, you have your party card games like Exploding Kittens. We have a selection of both varieties on this list so let’s get right to it. Here are the best card games on Android!

We don’t have any poker games on this list because we have a whole separate list specifically for those. You can check out that list here.

The best card games on Android

AI Factory Limited is a developer on Google Play. They make tons of card games and board games. Some of their offerings include Euchre, Spades, Solitaire, Gin Rummy, and Hearts. The games aren’t overly complex nor are they much to look at. However, they are rock solid. It’s a good way to get some simple card games on the cheap. They don’t take up much space on your phone and they just work. You can get them for free if you don’t mind ads. The paid version removes the advertising.

Clash Royale is one of the most popular card games ever. This one plays a lot like Hearthstone and features many of the same mechanics. You’ll be collecting cards based on the characters of the Clash of Clans universe and then using them to duel other players. It has one of the healthiest online communities that you can find these days. You can even join a clan to share cards and challenge clan members. It’s a freemium game. That’s not great, but at least it still plays well.

Clue is a mobile remake of the classic board game. Players shuffle about a map, collect clues, and try to guess the killer’s name, weapon of choice, and place of the murder. Players collect various cards with the suspects, tools, and locations. They then play one of each to guess the murderer. It’s a fairly faithful port of the original board game. There are additional micro-transactions in the game as well. However, they are wholly optional after you pay the $1.99 for the main game. We would like to include something like Uno. However, the mobile versions of a lot of those simple card games got wrecked by the freemium business model. Clue may be stretching the definition of card games a little bit, but it’s still a good game.

Cultist Simulator is a roguelike narrative card game. It plays a lot like a board game with a heavy emphasis on card use. One of the quirks of the game is its lack of a tutorial. Part of the fun is learning how to play, losing multiple times, and eventually conquering the game itself. The game also includes a story, actual lore, and some elements of horror. We’d explain how to play the game, but that would spoil the fun, wouldn’t it? The game runs for $6.99 and is often on sale for less than that. It’s also free with Google Play Pass if you use it.

We’re calling our shot a bit with this one. It still isn’t out officially just yet (at the time of this writing). However, we have played the game. It’s one of the better card games for sure. It competes with games like Clash of Clans and Hearthstone. You’ll collect cards, build a deck, and then duel opponents. It has a campaign mode, an online PvP mode, and more. The mechanics include lanes to add an extra strategical mechanic to the combat.

Exploding Kittens is one of the newer card games. This one is actually a successful Kickstarter project. The way this one work is you play with two to five players. Each player draws cards until one of them gets an exploding kitten. If they don’t have a diffuse card, their game is over right there on the spot. You can also play local multiplayer or with strangers on the Internet. You get a selection of cards for free when you download the game. There are a bunch of extras available as in-app purchases as well. Some don’t like the nickel-and-dime strategy, but at least most of the DLC is permanent.

We think porting this game to mobile was a genius move. Gwent is the card game in The Witcher players play when they need a break from the main parts of the game. The mobile version takes most of those mechanics and adds a few more. Players collect all the various bits in the game and construct decks to defeat opponents. The game also includes a couple of game modes, quick online PvP, and some good artwork for the cards. It operates in the same card game genre as games like Hearthstone or Legends of Runeterra and competes favorably with them in most instances.

Hearthstone is one of the most popular card games out there. With that comes a fairly large and loyal following of players that you can watch on Twitch or YouTube at your leisure. The game itself comes with hundreds of cards so that you can build some truly unique decks. It also features the ability to make multiple decks. That helps add some variety into the game. It gets semi-regular updates to include new content and the game is almost exclusively multiplayer. It’s free with in-app purchases. You can also sign up for a Battle.net account and play your save file on PC. This one is rather old, but it’s still pretty good.

See also: The best Hearthstone decks: Rise through the ranks

Legends of Runeterra is one of the newer card games on the list and it’s by Riot Games, developers of League of Legends. This one plays similarly to Gwent and Hearthstone. Players collect cards as well as commanders, build decks around both, and compete with each other online. The game tries to be a lot more about skill than luck, but it’s a card game so there is always some luck involved. Some other game features include social play with friends, a ranked playlist, plenty of cards to collect, and lore to unlock for those who like story stuff. The game is newer so it still has the occasional bug, but it’s usually nothing too serious.

Get it on google Play

Magic: The Gathering Arena is the official mobile game of Magic: The Gathering. The game is even published by Wizards of the Coast. It’s a fairly standard arena-style card game. You unlock and use various Magic cards to build decks and duel online against other players. This one also has multiple game modes, including popular real-life styles like Drafts. It’s relatively new and it’s still growing so it’s not quite perfect yet. However, this has an opportunity to be a pretty big deal, especially in esports. Of course, the Magic game to play before this was Magic: Puzzle Quest (Google Play). That one is still fine, but the official game is better.

Onmyoji: The Card Game is a card game spinoff in the Onymoji universe. It works like most card games. You build a deck and duel it out against other players or the AI. There is also a story for the player to experience, so it’s a bit more varied than PvP-only games. There isn’t a whole lot to talk about with this one. The deck building and dueling mechanics are pretty typical and the story is pretty good. There is also a shop mechanic where you can earn some extra resources. It’s good all-around except when the game has server issues, which happens infrequently.

Pokemon TCG Online is different from most mobile Pokemon games. Those games have you collecting the actual monsters and battling them out. This one, however, is modeled after the actual card game. Players collect cards, build decks, and take on one another in glorious battle. There is an online PvP mode, a mode to play with friends, and you can even trade cards with other players. Most of the complaints we’ve seen are login issues and crash issues on Chromebooks. Otherwise, people seem to like this one.

Reigns is a trilogy of popular card games. The premise is the same between all three games. Players are presented with a scenario on a card. The player swipes the card left or right to answer yes or no. The goal is to rule your kingdom for as long as possible. The first game provides the most basic experience. Meanwhile, the second game (Reigns: Her Majesty) and the third game (Reigns: Game of Thrones) add more game mechanics, actual story line, missions, and all kinds of extra mechanics. They are all relatively inexpensive and none of them have ads or in-app purchases. Reigns: Game of Thrones is the most recent so we linked it at the button above. All three games are available via Google Play Pass for free if you use that service.

Say WHAT? is, well, a mobile clone of the popular Cards Against Humanity game. We would list CAH here if it had a mobile version, but it does not. Say WHAT? lets you play games with various people with the usual array of raunchy, potentially offensive cards. You can play with friends or with random people as you choose and the game has a bunch of cards. That basically fulfills all of the qualifications. Cards Against games aren’t complex, really. If this one doesn’t work, try Evil Apples or Words Against Humanity. Both of those are solid substitutes as well. They are all free with optional in-app purchases that usually include card packs, the ability to remove ads, and some other stuff.

There are many Yu-Gi-Oh! card games in the Play Store. However, Yu-Gi-Oh! Duel Links seems to be the most popular and highest-rated one. Players collect cards, build decks, and duel it out against AI and human opponents. The free-to-play mechanics are surprisingly kind to players and even criticisms of the game seem to always come with compliments as well. It emulates the Yu-Gi-Oh! style about as well as can be expected for a free-to-play game and it remains fresh even if it’s not a young game anymore.

See also: The best Yu-Gi-Oh! Duel Links decks: Get your game on!

If we missed any of the best kids games for Android, tell us about them in the comments! You can also click here to check out our latest Android app and game lists!