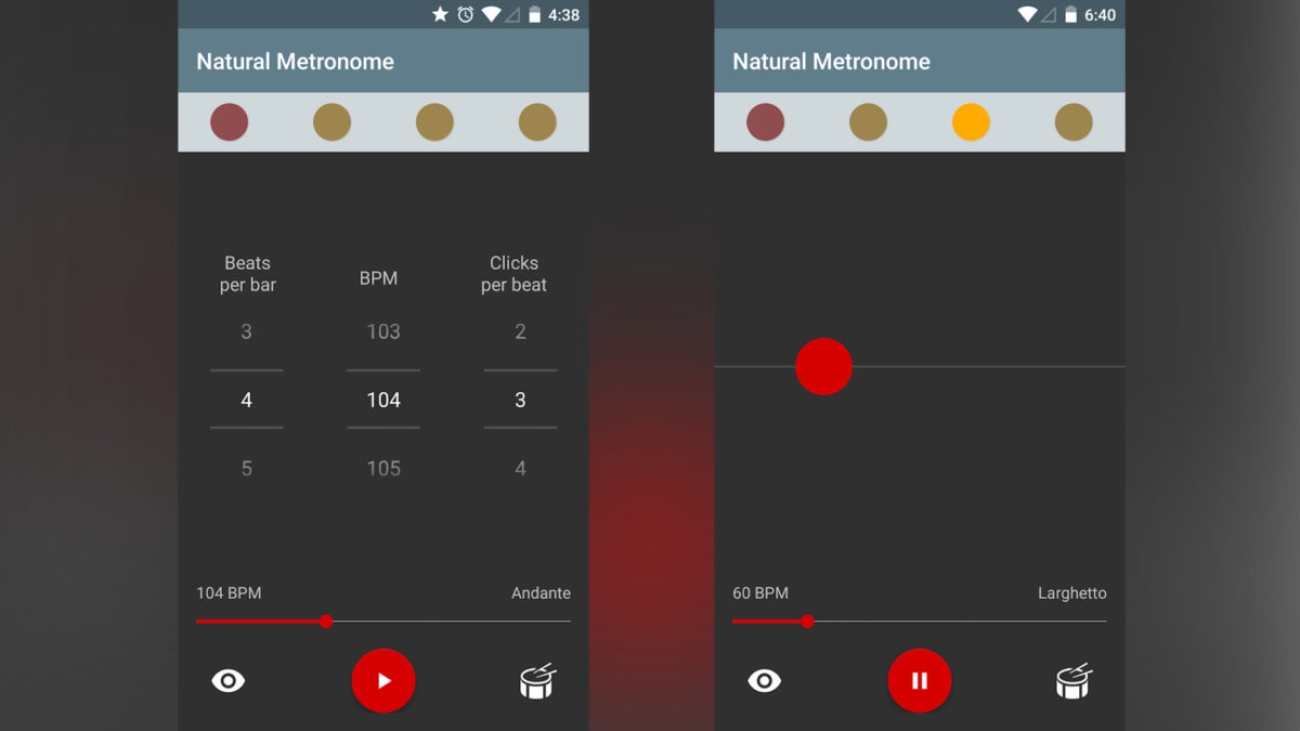 Metronomes are incredibly important in music. Musicians use them to keep time during practice and many drummers use them during live shows to keep time better. There is a lot that goes into a good metronome. You need to be able to customize it. It should probably also a visual element and not just an audio cue. Finally, it should be reasonably easy to use. Luckily, there are an absolute ton of reasonably good metronome apps for mobile phones. Here are the best metronome apps for Android that we could find.

The best metronome apps for Android

7Metronome is a rock-solid, serviceable metronome. The app comes supports between 20 and 240 beats per minute (BPM), more than 100 time signatures, and some actually good beat visualization. Additionally, you can tap the screen to set the beat and swipe on the screen to change the BPM on the fly. It also runs in the background so you can switch over to another app to record your playing or view sheet music. You can control it from the notification bar so you don’t actually have to leave the next app you go into. It has a reasonable price for its feature set and there really isn’t anything wrong with it.

Camtronome is one of several metronome apps that does something other than be a metronome. It has all the basic features for a metronome app. You can set a beat, change it, and there are a bunch of time signatures. It has the ability to set a beat by tapping on the screen like most mobile metronomes. However, this one also lets you record your session and play it back later. The advanced metronome customization and the recording make it an easy recommendation for a lot of people. Finally, you can control this app over Bluetooth or USB keyboards. It’s a good metronome that kills two birds with one stone.

Fender Guitar Tuner is another app that kills two birds with one stone. This one acts primarily as an instrument tuning app. However, it also has some good, basic metronome features. The tuning mode comes with an auto tuner that utilizes your microphone or a manual tuner where you can tune by ear. It also has a chromatic mode, preset tunings, and custom tunings. The metronome side is pretty basic. The app includes 65 drum tracks across a variety of genres for easy practice. The metronome mode has a bunch of options, but nothing too fancy. We recommend this one for people who just need a simple metronome and also want a tuner as well.

Get it on Google Play
Try these: The best guitar tuner apps for Android

Metronome Beats is one of the most popular metronome apps on mobile. It supports anywhere from one to 300 BPM, a wider range than most. There is also a tap function to set the beat yourself. Some other features include subdivision of the beat so you can practice faster parts of your music, the ability to change the pitch of the metronome to hear it better over your instrument, and more. The free version has ads, but also all the features. The only downside is the learning curve. Some features take a minute to get used to. Otherwise, there’s a reason this one is so popular.

Metronomerous is one of the best totally free metronome apps. Like most, it does the basics. You can change your BPM, tap in your tempo, adjust the tempo with a slider, or manually input a numeric one. You can also divide the beats in various ways to practice faster or more difficult pieces of music. Some other features include a bunch of sounds, the ability to gradually raise the tempo during playback, and support for three languages (English, German, and Russian). It doesn’t have every conceivable feature, but it’s really difficult to complain about given its price.

Natural Metronome is another simple, but functional metronome. It does the basics as we’ve explained up to this point. In addition, the app makes sounds to the beat and also shows you a visual indicator. Yes, it also includes the tap feature in case you don’t know the BPM off of the top of your head. The app has a simple UI, it’s pretty easy to use, and there are no ads, even in the free version. It does play in the background so remember to turn it off before closing the app or it’ll just keep going. This is another great option for free metronome apps.

Phi Metronome is a bit of a diamond in the rough. It’s relatively new compared to other metronome apps. However, it has some unique features. For instance, it’s one of the few metronome apps that let you use irrational numbers in your time signatures. It’s a super niche feature, but one that we’re sure some people will appreciate. Additionally, the app has themes, most of the standard metronome features, and it’s even optimized for unusual devices like Android TV, in case you want to do that. The app is relatively new so there are likely some bugs, but it’s otherwise a one-of-a-kind kind of metronome.

Stage Metronome is an excellent metronome for musicians. It has a ton of options, including most of the stuff we’ve listed already, such as customizable BPM, various time signatures, and stuff like that. This one is nice because you can create a setlist from the app. Each song can have its own BPM, time signature, etc. Thus, you can practice multiple entire songs without needing to dial in the settings after each track. That makes it great for live shows as well, so your drummer can just go straight from one song to the next. The UI is a bit overwhelming at first, but the features are solid and it doesn’t take too long to figure out.

The Metronome by Soundbrenner

The Metronome by Soundbrenner is another popular and excellent metronome app. It has one of the slickest UIs of any metronome app on the list. The dials, layout, and graphics are smooth and crisp. Luckily, it’s not just a pretty face. It has some good features as well. The app comes with 20 metronome sounds, a light and dark theme, a setlist feature similar to Stage Metronome, support for the usual stuff like customizable BPM, and more. This one even lets you plug into USB and Bluetooth MIDI devices so you can control it from there. Lastly, The Metronome also loads into DAWs like Ableton so you can literally use it anywhere. It’s a powerful tool to be sure.

Generally speaking, the only person in the band who uses a metronome is the drummer. The drummer keeps pace and everyone goes off of the drummer. However, for whatever reason, you may want to try using a metronome as a whole band. Metrogether (linked at the button below) and Bandtronome (Google Play) are two solutions to this problem. Both apps allow you to sync up with your band members’ phones so everyone can keep beat together. Metrogether lets you directly sync to phones using Bluetooth while Bandtronome uses a server-based solution that controls everything. Both of them have a learning curve. Unfortunately, there aren’t a lot of apps that do whole band metronomes since most bands don’t do it that way. Still, two options is better than zero.

If we missed any great metronome apps for Android, tell us about them in the comments. You can also click here to check out our latest Android app and game lists.
Thank you for reading! Try these out too: