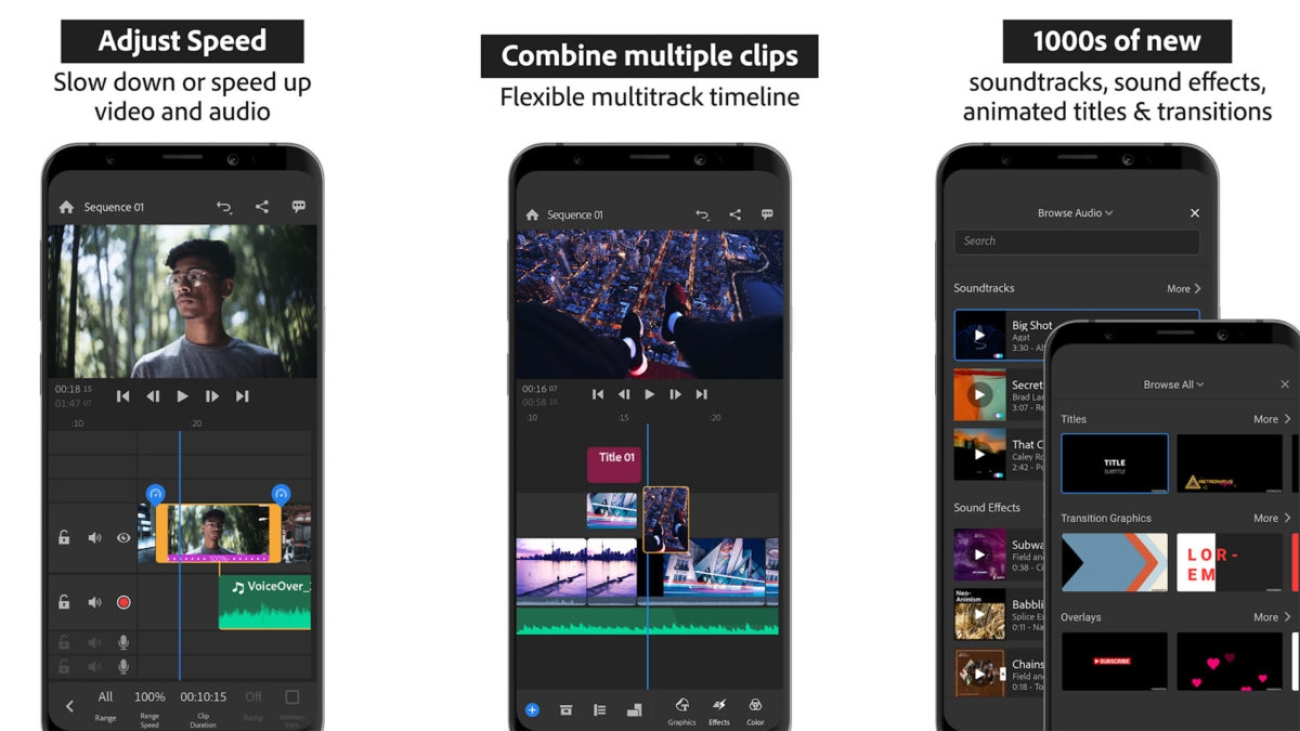 More and more people are filming movies on smartphones. It makes sense, honestly. Most of today’s flagships do 4K shooting, and that’s actually higher resolution than some mid-range DSLRs. Hollywood has nicer cameras, but shooting movies on Android devices is entirely possible. Of course, it’s not just about the camera. Filmmakers have to worry about scripts, documenting which scenes are shot, and get release forms for everyday people who may be in the movie unintentionally. There are apps for most of those things. Here are the best filmmaker apps for Android!

The best filmmaker apps for Android

ActionDirector and PowerDirector are two of the most popular video editors for Android. ActionDirector is a slightly simpler app. You can record video, add some quick filters, and fast and slow-motion support. PowerDirector (Google Play link) is a more traditional video editor. You can import files, cut them up, put them together, edit them in various ways, and export a complete project. It works best on larger screens like tablets or Chromebooks. We still recommend a full desktop editor, but these will do in a pinch. ActionDirector has a single cost, while PowerDirector requires a monthly subscription.

Adobe has a couple of decent video editor apps on Android. They include the older Adobe Premiere Clip and the newer Adobe Premiere Rush. We would recommend Rush because it’s newer and sure to get plenty of updates soon versus its older sibling. You can shoot, edit, and export videos directly from the app. It supports multi-track editing, some customizations, and cloud support. It costs $9.99 per month as a standalone service, or you can get it as part of the Adobe Creative Cloud.

It’s difficult to find a good clapperboard app, but we think this one fits the bill. It has no frills and no-nonsense bloat. The app features customizable countdown times, accurate timekeeping, and a decent log so you can keep track of your shots. You can keep little notes about each take and whether or not to print it. It’s also fairly cheap at $1.99 and has no additional in-app purchases or ads. It’s definitely one of the better filmmaker apps on Android.

There are a variety of word processors on mobile, including Google Docs, Microsoft Word, and many other popular ones. However, the adventurous writer may want to try DubScript. It’s a plain-text writer that outputs stuff in screenplay format without a ton of extra work. It uses the Fountain markup. The app also outputs to FDX, PDF, HTML, and it works with cloud printers. Again, Google Docs or Microsoft Word on mobile works for most people, but this one is specifically for screenwriters.

See also: The best word apps for any writing you can think of

There are apps for the legal side of filmmaking as well. Easy Release creates release forms. You have people sign them, and that’s it. It has an industry-standard release form in it to start with. It also supports 17 languages. You can upload completed forms to Google Drive or Dropbox in PDF or JPEG format. It’s mostly useful for photography. However, a little bit of editing makes it work for video production as well. Of course, larger productions have a lawyer that does this for you, so only a small demographic will find this useful.

FiLMiC Pro is a top-rated app on iOS. It works okay on Android. It’s a video camera app. This one is a heavy app with a ton of features. That includes tons of manual controls, support for up to 240 FPS, a histogram, a waveform monitor, and a lot more. There are optional features for an additional price on supported devices. You even get third-party hardware support. It’s a fairly serious app. However, it seems to have some stability issues and bugs. The more the developers update the app, the better it’s going to be for sure. There aren’t many filmmaker apps quite like it. We highly recommend trying the evaluation version of the app to make sure the app works with your device. It gets better with every update so keep it in mind if it’s not polished enough for you just yet.

See also: The best drone apps for Android to enhance your flight

KineMaster is another excellent video editor app on Android. It has the usual timeline style of editing and multiple layers, video effects, excellent trimming controls, transitions, and more. It also has some more advanced features like LUT filters, Chroma Key, 3D transitions, and some volume stuff. This works excellently on a tablet or a Chromebook, but it functions on a phone if needed. The subscription cost unlocks every feature. This is right up there with PowerDirector as the best on Android for video editing.

Shot Lister is a sort of to-do list app for filmmakers. It lets you do a variety of things. The regular $13.99 version lets you create and schedule all of your shooting activities. Once done, you simply choose the shoot day, and the list of scenes will appear. There is an additional version for an additional $13.99 per month subscription that includes more powerful features like importing scripts, adding storyboards, and more. Here’s the thing, this is a lot like FiLMiC. It has a ton of potential, but bugs keep it from being truly amazing. We hope the developers keep going with this one.

Sun Surveyor is an excellent app for filmmakers. It gives you quick information about sunrise, sunset, and magic hours. This lets photographers and filmmakers plan their shots. You want a perfect sunset? This app lets you plan it hours in advance. Some other features include a live view of the projected sun and moon positions, offline mode, 360-degree panoramic information, and more. The pro version is a bit expensive but totally worth it. It’s quite outstanding.

TimeLapse Calculator is a simple tool. It helps you shoot proper time lapses. You tell the app how long you want the shot to be. It tells you the proper shooting interval, total number of photos taken, and total memory usage. That’s basically it. It’s a simple app that does a simple thing. Sometimes it’s nice when things like that happen. It also helps you bring proper storage accommodations for your time-lapse shot. Many of the features are free. There is also a very cheap pro version.

If we missed any great filmmaker apps for Android, tell us about them in the comments! You can also click here to check out our latest Android app and game lists!