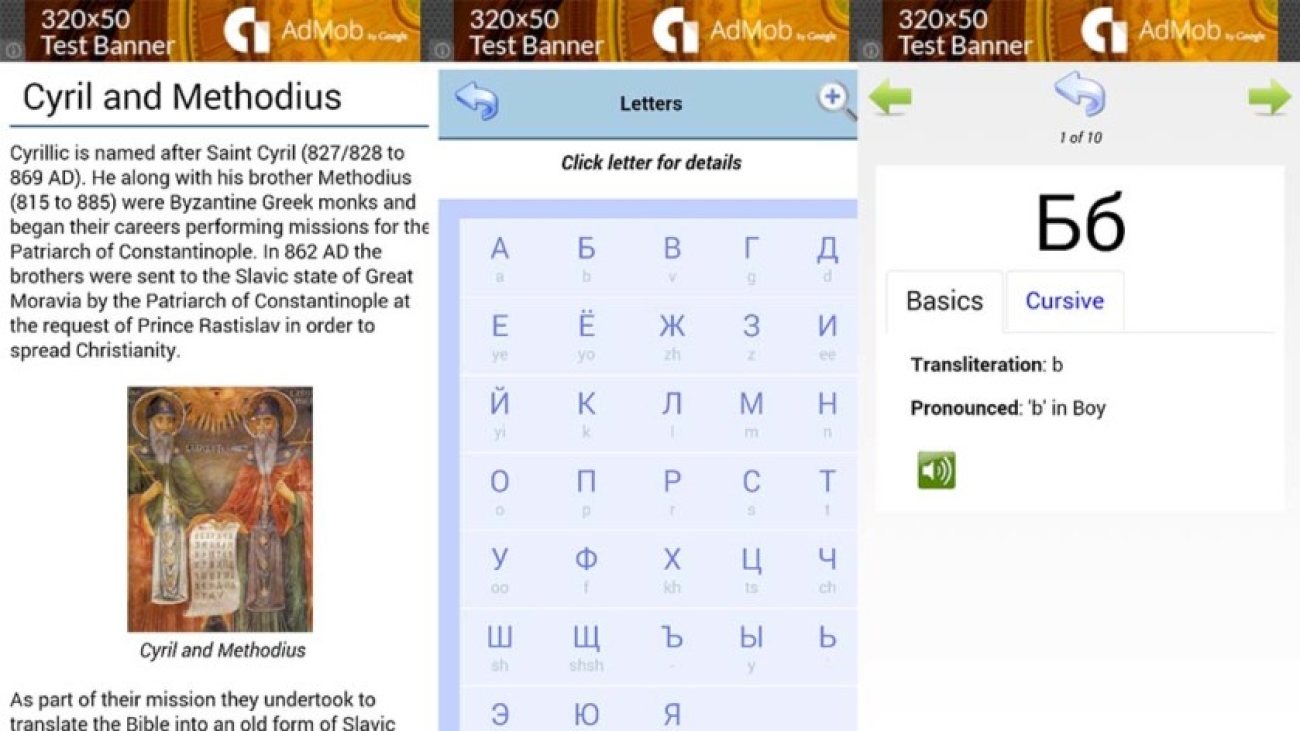 Russia isn’t the most popular place in the world right now. However, plenty of people want to learn the language anyway. Over 140 million people speak the language, so it’s probably worth learning for travelers or people planning long trips to Russia. Additionally, it’s the largest native language in Europe. Its popularity made it a good target for language learning apps. Thus, there are plenty of Russian learning apps available. Those looking to learn with the best ones came to the right place. Here are the best Russian learning apps for Android.

Cyrillic is a simple Russian app. Think of it as an ABC book for the Russian language. It teaches reading and writing in Russian. Additionally, the app contains quizzes, lessons, history, fun facts, and flashcards for easier learning. This one probably isn’t great as a primary study source. However, this paired with Busuu, Duolingo, Memrise, or Rosetta Stone would make a decent one-two punch for beginners. Intermediates and experts probably already know this stuff. Thus, this one is just for beginners.

See also: The best Russian to English dictionaries and phrasebooks for Android

Drops is one of the newer Russian learning apps. It’s also one of the most effective. The app utilizes short-term lessons, conversational Russian, and quick, fun games. There aren’t any hardcore grammar lessons, but you pick it up as you go. The app includes 1,700 words and phrases over 99 categories. You get a lot of the stuff for free. A subscription unlocks the rest. This isn’t quite as powerful as something like Duolingo or Memrise. However, it’s still a step up from your common Russian phrasebooks.

Duolingo is one of the most popular language-learning apps. Of course, it includes Russian as a choice. The app focuses on short, bite-sized lessons for learners on the go. You can usually make it through an exercise in a few minutes. There is an emphasis on vocabulary and conversational phrases—you kind of pick up the grammar as you go. The app is entirely free with no in-app purchases, although you can get additional features if you go with the subscription cost.

See also: How to use Google Translate with over 100 languages

Google Translate is an excellent tool for scholars and travelers. It’s also one of the most powerful translation tools available. The app works in three different ways. You can type in words and get translations in over 103 languages (59 offline). You can also speak directly to the app for live translations. Finally, the app uses the camera to translate things like menus or road signs at the drop of a hat. These features are mostly for travelers. However, they also provide great practice for learners. The app is entirely free, and yes, it supports Russian.

HelloTalk is a really neat app for learning Russian. It uses a social network of sorts. You teach another person your language, and they return the favor. This is an excellent method for practicing your new skills in the real world. The app offers voice and video calls along with text, picture, and audio messages. You can basically practice whenever you want. We don’t recommend this as a primary source for Russian learners. However, it’s an excellent secondary study aid. We definitely recommend it for that.

Memrise is one of the most powerful and popular language learning platforms on mobile. It also supports Russian. The app uses every road possible for its lesson plan. That includes grammar and vocabulary lessons, conversational Russian lessons, and even a social element similar to HelloTalk or Tandem. You also get a pronunciation guide and offline support. There isn’t a whole lot wrong with it. Some of the content is available for free. The rest requires a monthly or yearly subscription. We would’ve liked a single-cost option like Rosetta Stone, though.

Mondly is another popular platform for learning Russian. It has individual apps for most of the languages it offers. Thus, you don’t get the extra nonsense from the languages you don’t want. Mondly focuses on conversational Russian, core words and phrases, and light grammar. You also get a pronunciation guide and a variable lesson plan for your learning speed. It’s a lot like Memrise, honestly. There are a ton of features, but you need a subscription for most of them. It’s a decent platform if you don’t mind spending the money.

Rosetta Stone is one of the biggest names in language learning. They support two dozen languages, and yes, one of them is Russian. This one focuses on fundamental vocabulary and conversational Russian. It builds that foundation and continues from there. It’s a fairly effective method, even if it’s a little more traditional than something like Memrise or Drops. The app also includes offline support, a speech recognition system, and plenty of practice lessons. It’s probably the most expensive app on this list. However, it really is for serious learners only.

Simply Learn Russian is, well, a very simple app for learning Russian. It actually functions better as a phrasebook with some additional features. You get over 1,000 phrases and words in over 30 categories (in the premium version) along with quizzes, flashcards, audio pronunciations, and some other features. This is definitely better for travelers. However, those serious about learning the language can easily use this as a secondary study aid. It’s also relatively cheap compared to most apps on this list.

Tandem is a lot like HelloTalk. It hooks you up with other language learners. They teach you their languages and culture, and then you teach them yours. The community aspect is fun, and it really helps hone your conversational Russian skills. You also get voice and video calls along with audio, picture, and text messages. There are even tutors to help further, and you can choose what topics to talk about that day. This one and HelloTalk are equally good in slightly different ways. Speakly is another app in this space that isn’t terrible.

If we missed any great Russian learning apps, tell us about them in the comments! You can also click here to check out our latest Android app and game lists!