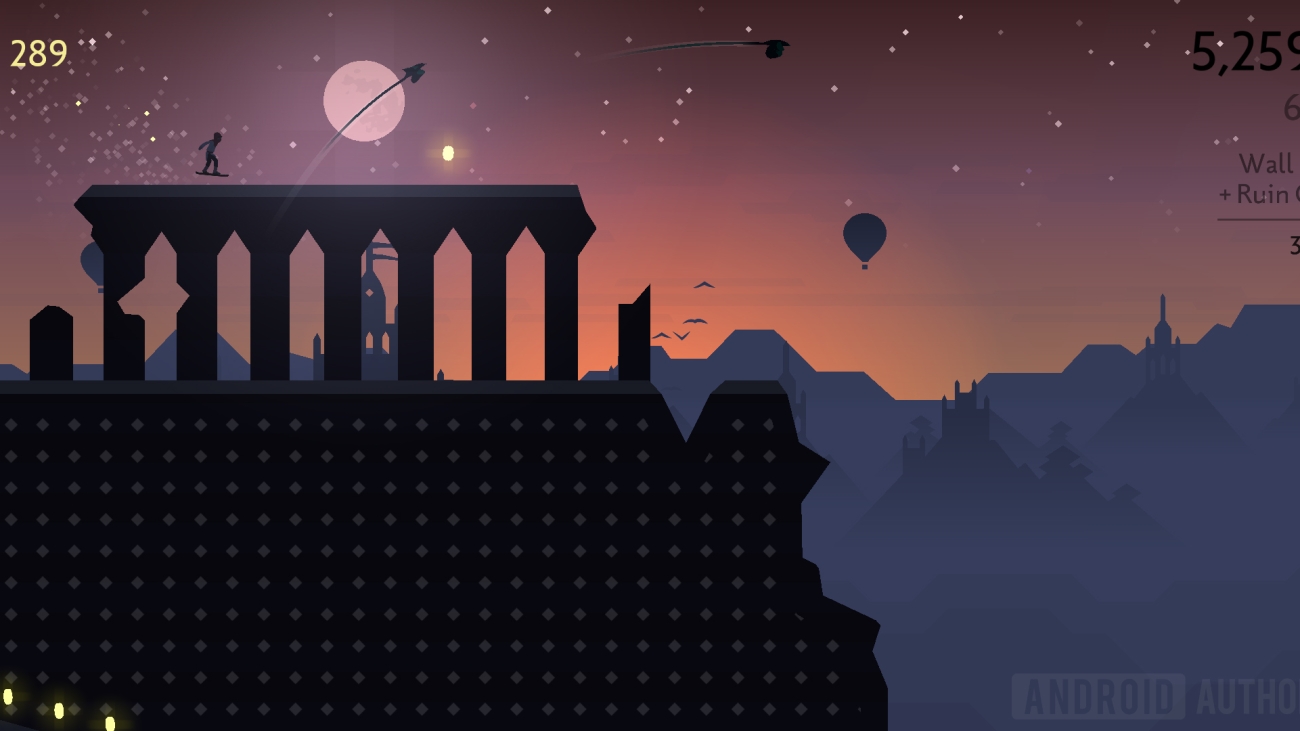 Endless runner games have become quite popular in recent years. For those who don’t know, endless runner games don’t end. You continuously “run” through the game until an obstacle stops you with the point being to achieve the highest possible score. Their quick play, addicting nature, and simple controls make them an accessible genre that virtually anyone can pick up and play. Everyone knows about the big infinite runner hits like Temple Run, so let’s take a look at the other best endless runner games for Android!

Alto’s Adventure and Alto’s Odyssey are two excellent 2D side-scrolling runner games. You ski down mountains, make seriously huge jumps, avoid obstacles, and collect items. Both of them also feature simple graphics that manage to look much better than they really are and that’s a good thing. Alto’s Adventure basically stops there. Alto’s Odyssey, the newer game, also features dynamic weather, unlockable characters, a zen mode, and even a screenshot feature in the game’s menu. Both of them are freemium, but frankly you don’t need to buy anything to enjoy these. They are truly great endless runner games.

Crash Bandicoot: On the Run

Crash Bandicoot: On the Run is one of the newer endless runners on the list. It uses a lot of elements from the classic console games in an endless runner format. In this variant, Crash or Coco runs around, avoids obstacles, blows up blocks of TNT, and takes on various bosses. It also takes place in familiar backdrops from the games. It’s a neat nostalgia trip for fans of the series and a surprisingly competent endless runner. It’s developed by King, developers of the Candy Crush franchise.

Crossy Road is one of the most popular infinite runners of all time. It plays a lot like the classic game Frogger. You move forward by crossing streets and streams. Players avoid being hit by cars or falling into the water in order to proceed. The game features a host of unlockable characters, online and local multiplayer, Android TV support, and Google Play Games cloud saves and achievements. The simple, smooth game play with the extra features make it hard to find any actual flaws with this game. It’s family friendly, easy to play, and you can play it for ten minutes or over an hour if you want to. It’s a freemium game, but the in-app purchases are for continues and character unlocks. That’s not too bad to us.

Into the Dead 2 is one of the newer endless runner games. It also has survival elements. You run through the zombie horde forever to stay alive. The game includes pretty decent graphics, dog companions, a variety of weapons to collect and upgrade, multiple endings, and daily events and bonuses. There are also tower defense elements as well as some other varied game play. It’s definitely better than the first one and the first one was on this list from day one. Like its predecessor, this one is a freemium game like most endless runner style games.

Jetpack Joyride 2 is the latest game in the popular Jetpack Joyride franchise. The newer version includes improvements and additions to the previous game. They include more polished gameplay, more shooting mechanics, updated visuals, new power-ups, new vehicles, and more jetpack upgrades. It’s a very good endless runner, even if some people believe the second iteration doesn’t capture the fun simplicity of the first. You can always play the first one (Google Play) if you prefer the simpler style.

Mars: Mars is one of the more unique endless runners. Usually your goal is to run along a track. In Mars: Mars, your goal is to jump from platform to platform. Missing the platform causes a rapid unscheduled deconstruction. In other words, you blow up. The end goal is to get as long of a streak as possible. You can also take selfies with your character and share them. It’s not a huge game. However, at the time of this writing, it’s completely free to play. You’ll just have to deal with the occasional advertisement. Or you can play it for free with Google Play Pass if you want.

Slashy Camp is an endless runner spin-off of the popular horror game Slayaway Camp. This game is comparable to games like Crossy Road in terms of gameplay mechanics. You move your character through the game while killing stuff and avoiding obstacles. The subject matter doesn’t make it the most friendly game for younger kids, but otherwise, it’s pretty fun. This one is newer and the developer is still working out some bugs, but it should be a solid experience sooner rather than later.

Smash Hit is one of the older endless runner games on Android, but it’s still one of the best. The developer gave it an update in 2019 so it’s ready to go on modern devices. You play this one from the first person perspective. The player drifts forward toward a bunch of panels of glass and you launch balls at the glass to shatter it. Your ammo count is also your life total. It helps add a bit of strategy instead of just running and swiping. This one is also beatable, unlike most infinite runners. The single $1.99 purchase unlocks save points and some other in-game stuff, but you can play the full game for free if you want to. The developer also does PinOut, a pinball style infinite runner with good graphics and a neat premise. You can get Smash Hit at the button below and PinOut here on Google Play.

Sonic Dash 1 and 2 are two endless runner games by SEGA. Thankfully, Sonic Dash is a competently done infinite runner. Both games have your basic runner mechanics. The second one allows you to switch out characters on the fly. The objective is to get the highest possible score. They also feature boss fights, familiar characters from the series, and ring collecting of course. The extra stuff makes it more fun, even if the basic mechanics are relatively unchanged from other infinite runner games.

Subway Surfers is one of the classic endless runner games. In traditional fashion, you’re being chased down and you must dodge obstacles, use power-ups, and avoid being hit so you can stay ahead and keep from being caught. This one features leaderboards so you can challenge the scores of your friends along with more acrobatic mechanics than normal. You’ll be jumping on and off of trains, subways, and even power lines. Other than that, it’s a pretty standard offering with a rock-solid foundation. The same developers also made Blades of Brim (Google Play) if you want to try that one out.

If we missed any great endless runner games for Android, tell us about them in the comments! You can also click here to check out our latest Android app and game lists.