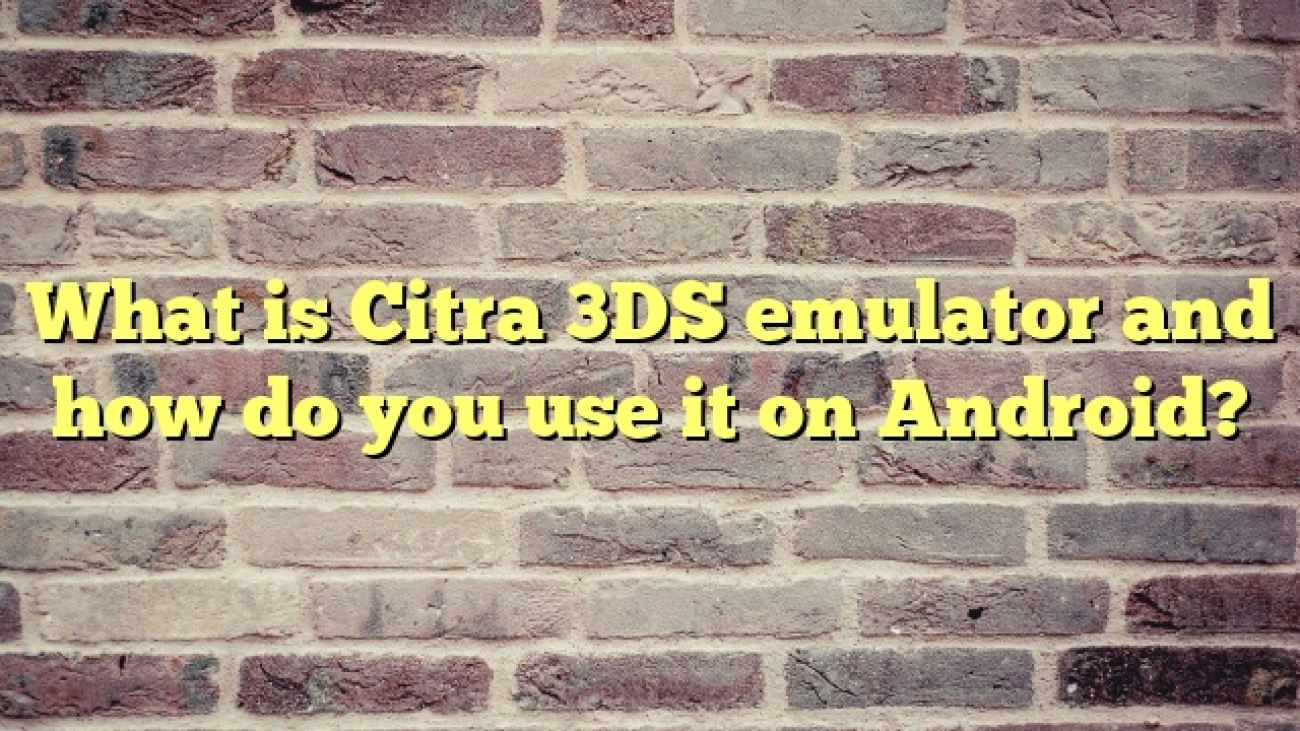 Emulation is one of the many nifty things you can do with Android devices, and now that the Citra 3DS is on the Google Play Store, you have even more options. This official version launched for Android in May 2020 and offers several benefits over previous unofficial versions.

Here, we’ll outline everything you need to know about the Citra 3DS emulator for Android, starting with a little history. You can also download it right away by clicking below.

What is Citra emulator?

Citra was the first Nintendo 3DS emulator for PC. It was first released by developer Team Citra in 2014, and they slowly added support for more games over the years. The devs are still actively working on it, and it now supports most commercial games, save states, and even online play. The latter is only available on PC, at least for now.

Citra isn’t the only 3DS emulator out there these days, but it is the best. It can’t play every 3DS game, but it supports the big hitters like Pokémon, The Legend of Zelda, and Animal Crossing.

It’s worth pointing out that the Citra Team only develops the emulator itself. Pirating 3DS games is still very much illegal. Even if you own the cartridge, downloading ROMs is still a legal gray area. The only legal way to get 3DS ROMs is to dump them yourself from a cartridge you own. Citra has a short guide on that here.

Didn’t Citra already launch on Android a few years ago?

The Android app that launched in 2018 was not an officially licensed app by Citra. This initial app was developed by SachinVin, an independent developer outside of the official Citra team. Although the app was a great start to what Citra users had been requesting, it had a few performance issues.

The Citra team said that the performance issues with the app developed by SachinVin “led to an increase in support and feature requests of the team – who had nothing to do with that unofficial Android port.” They also said that “while the team applauded the efforts of this developer, [they] had to deny providing support for it because it was unofficial.”

Though the Citra team could not provide support to this app, they invited SachinVin to collaborate with them to produce an app that Citra users would love (and actually be able to use). We tested this unofficial app on the Samsung Galaxy S20 Ultra and OnePlus 7 Pro earlier this year, and you can read all about the results below.

Check out: Tested: Is the Samsung Galaxy S20 Ultra the best Android phone for emulation?

There were multiple issues that needed fixing after Citra brought SachinVin to the team. Settings within the app didn’t save, the button overlay was clipped, and there were many graphical and layout issues as well. These issues had to be fixed, then tested, then fixed again, and so on. Android is a finicky system to work with. So a lot of work had to be put into the app before presenting it to the public.

In addition to fixing technical issues, Citra also implemented quite a few features that help with performance. To list a few, GPU emulation on one of the CPU cores, OpenGL ES tweaks, the ability to use your phone keyboard in games that need it, motion control support, and camera/mic functionality.

One of the best additions was the ability to use an external gamepad with the app. One member of the Citra team thankfully realized how many people would want gamepad support, so they worked it in. It works with almost all gamepads. So if you have one, you won’t have to worry about using pesky touchscreen controls. The Citra team even says that if your gamepad doesn’t work, you can reach out to them on their Discord server; they’ll try to figure out what the problem is and get your gamepad working. How cool is that!

How do you use Citra Emulator? Once you download and install Citra Emulator onto your Android device, there are a few steps you need to take before you can start playing. We won’t touch on every single setting in the app, but rest assured there are many ways to improve performance. Make sure all of your (legally acquired) ROMs are saved in the same folder on the device before getting started.

Here are the basic steps for how to use Citra Emulator on Android:

If you’re having choppy performance, it’s possible that your device simply isn’t powerful enough to run a 3DS emulator. It takes a lot of juice, so anything other than a flagship from recent years will struggle.

That said, there are a few things you can try. First of all, change the internal resolution to 1x. You can also turn on Enable asynchronous GPU emulation and turn off Accurate Shader Multiplication for a smaller boost. Also bear in mind that not every 3DS game will work, and some will work better than others.

Although you can download the Citra Emulator app from the Play Store at no cost to you, there is a paid Premium version offered as an in-app purchase. It costs about $5 and unlocks a few special features like a dark theme and texture filtering.

The real benefit of Citra Premium is supporting the developers. They’ve been working on Citra for years on their own time. By supporting them, you can rest assured that the app will continue to be updated in the future!

It’s clear that the Citra team wants to deliver a fantastic product to fans of Citra on other platforms. They are consistently updating the app (at the time of writing this, last update was 02/28/2021). Although the app is still in early access, it seems to be working great. And you can be sure that even after the app moves out of this phase, Citra Team is going to be doing everything they can to improve and enhance the emulator for its users.