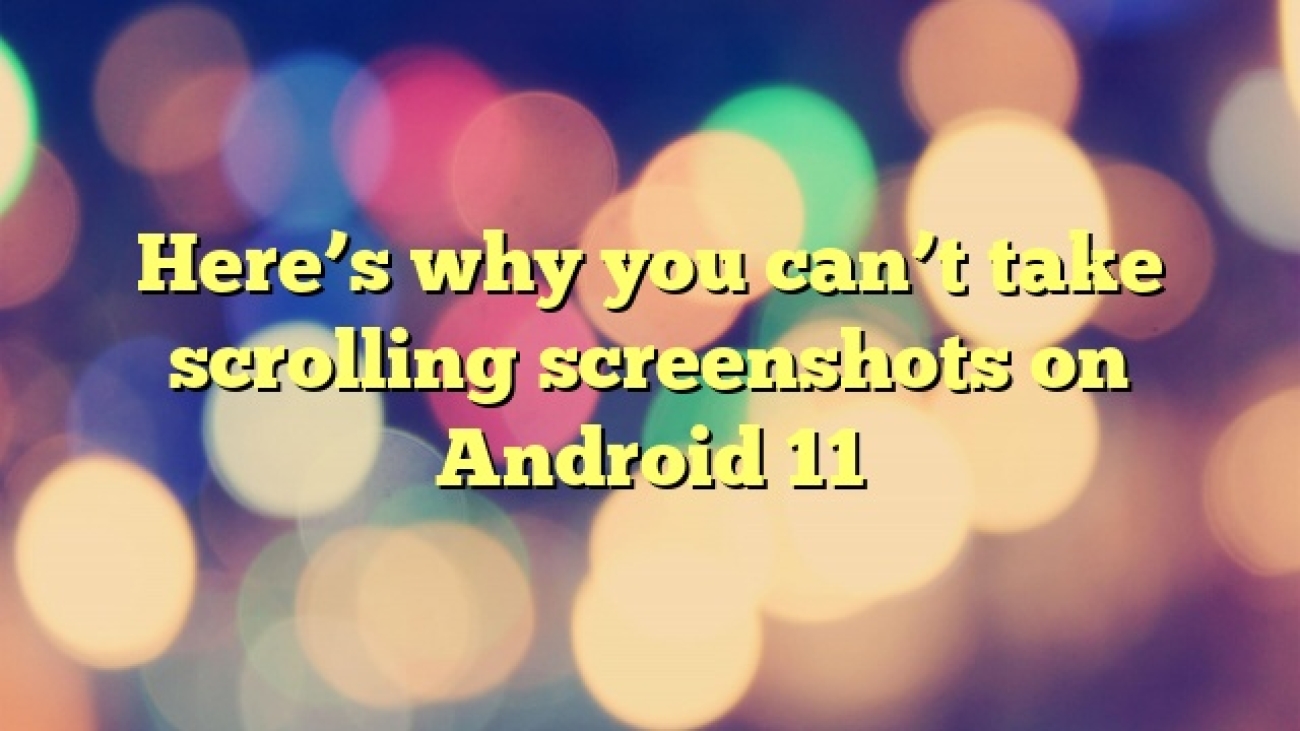 How To – Android Authority

Android features getting the ax in a developer preview is nothing new. In fact, it happens time and time again in every cycle. Yet, it’s still a bummer when we see a popular feature wind up on the cutting room floor. This turned out to be the case with scrolling screenshots in Android 11, and here’s what we know about the decision.

See also: How to take screenshots on Android

We’ll dig into Google’s decision to skip the feature, as well as touch on the devices that allow for scrolling screenshots. There are even a few apps you can install to regain the feature, so let’s dig in.

What exactly is a scrolling screenshot? When you set up a screenshot on your phone or computer, you can usually only capture what you can see on your screen at the time. Adding a scroll enables you to capture the entirety of a long webpage or an entire Twitter thread. It’s still a screenshot, but it doesn’t limit you to the size of your display.

Of course, it’s not a life or death feature, but it certainly can make life easier. Ask yourself, would you rather load up your camera roll with multiple smaller screenshots or capture one and be done with it? We know what we would choose.

That sounds great, why did Google cut it? It really is a great feature, but we understand why Google didn’t feel ready to include it with the Android 11 launch. Google’s own Dan Saddler confirmed that the feature would be omitted during a Reddit AMA last July, though he did say that the team is still working on it.

Essentially, Google had to leave scrolling screenshots out of the Android 11 launch because it did not want to limit the feature to just a few apps. Saddler said of the feature, “our goal on the platform team is to build this in a way that any app can plug into… Look for it in a future API bump.”

See also: 5 best no root screenshot apps for Android and other methods

The good news is that means there’s still hope for the future. We can expect Google to get around to scrolling screenshots in its own time. For now, it’s easier to try a few alternative methods to capture your lengthy screenshots. If you’re determined to capture your scrolling screenshots, fear not. OnePlus, Huawei, Samsung, and many other OEMs have built the feature into their respective Android skins, and the process is straightforward. Here are the steps to follow for most of the top manufacturers:

There are other ways to capture a scrolling screenshot, depending on your device. We’ve done our best to include a few of the most popular methods, but you may have to do some additional research. If you cannot take scrolling screenshots with your Android version, try some of the apps listed below.

See also: Poll: How do you take screenshots on your phone?

If you’re absolutely determined to get scrolling screenshots on your phone, all hope is not lost. There are plenty of apps you can try out until you find the one that works for you.

One of the most aptly named is LongShot for Long Screenshot. It’s entirely free to download and use, and the app offers three options to capture your content. You will have to give LongShot permission to display over top of other apps, but such is the nature of screenshots. The app allows you to capture web pages in their entirety or select images from the longer page itself. If you choose to scroll screenshot a webpage, the process is literally as simple as entering a URL. Seriously, that’s all there is to it.

Another top option goes by the name Screen Master, and it’s once again free with a few ads here and there. You won’t have to root your device, which is always nice to hear. Screen Master allows you to take scrolling screenshots, make notes on top of your images, and even stitch smaller images together. It sports a cleaner interface overall than LongShot, though there are a few features that you may have to pay for depending on your needs.

One more scrolling screenshot app for your consideration is Full Screenshot Capture and Screenshot Editor. The name is a lot, but it explains just what you can do. There are just a few simple buttons to get the hang of, and you can screenshot entire web pages with the built-in browser. You’ll have to position the bars at the top and bottom of your page to denote where you want to begin and end your shot.

Will we see scrolling screenshots on Android 12?

We’ve been exploring the Android 12 Developer Preview to no end, and we’ve already picked out plenty of our favorite new features. So far, we’ve come across new ways to mark up screenshots with emojis, paintbrushes, and more. It’s not exactly what we’re looking for, but it’s still progress on the screenshot front.

You’ll have to stay tuned for more news on scrolling screenshots as Android 12 inches closer. We still have our fingers crossed for now.

How To – Android Authority